In Search of Today’s Zeitgeist…

Past and Future Conditions
was an exhibition of artists interested in highlighting paradigms in which
truth and knowledge
is discovered.

Richard Munaba videos show lonely and humorous re-­enactments of Missed Connections based on letters from the website ‘craigslist.org’.

The exhibit also includes works by Jennifer Gradecki & Derek Curry, who have created an interactive artwork that replicates techniques that intelligence agencies use to collect data.

Annamaria Gundlach and Neranza Noel Blount, on the other hand, have crafted mixed media objects on the topic of environmental awareness in an era of disposable plastics and water contamination.

Robert Thompson comments on the public’s awareness of health and safety in industrialized food production with ‘truthful’ warning labels.

One intricate piece by Shelley Mangold even wrestles with the mysterious conditions of pre­historic cave people as they painted and carved long ago.

Participation in the show was predicated on art submissions and written proposals from the following text:

In order to better understand your work as it relates to the theme of the show, please write a paragraph about which ‘episteme’ (listed below or newly invented by you) that you consider your work to be a part of, and how your episteme fit’s into the trajectory of your artistic practice? (The concept of epistemes is described below.)

“In The Order of Things, Foucault is concerned with epistemes: an episteme is a set of ordered but unconscious ideas that are foundational in determining what is regarded as accepted knowledge in particular periods and times. This was also called the “historical a priori” by Foucault (Flynn 2005: 31; Merquior 1991: 36). But the episteme is not a general body of known knowledge or natural science. An episteme is a kind of unspoken and unconscious stratum underlying and being the precondition for accepted knowledge in each historical period, so that Foucault thought that to unearth the episteme of a period one engages in a metaphorical “archaeology” (Merquior 1991: 36).

Each episteme from one period to the next is supposed to be discontinuous and incommensurable in the sense of being radically different (Merquior 1991: 37), and there is only one underlying episteme for each historical period:
“In any given culture and at any given moment, there is always only one episteme that defines the conditions of possibility of all knowledge, whether expressed in a theory or silently invested in a practice.” (Foucault 1970: 178).

Some examples of historical epistemes as identified by Foucault are as follows:

(1) the pre-Classical period (the later Middle ages and Renaissance up to the mid-17th century), in which people thought in terms of similitudes, resemblances and antipathies (Merquior 1991: 45);

(2) the “Classical” period (the mid-17th to 18th centuries), in which the prevailing episteme stressed representation, mathesis (a science of order and measurement), and taxinomia (science of classification) (Merquior 1991: 46);

Artists of Past and Future Conditions, each in their own way have created artwork that highlights ‘now’ by focusing on the conditions of the past, present, or future. The exhibit also includes works by of Marika and Leopard of Minsk, Belarus and Berlin, and by local artists Joyce Gralak, Peggy Mann, Norman Magden, Emily Schleiner and Christina Fowler­graves.


What have I been studying lately? WordPress themes, meaning that I am going over the php structure that undergirds the markup of any given WP site. At first the php code seems all too clear, with php pointers dividing up themes into sub-themes, easily divided up and named. However, once I started to make variations of my initial WP loop (the point at which content is inserted) I have consistently confused myself with loops inside of loops and pointers into pages with pointers into pages with pointers… I do find most educational tools lack a visual explanations for the complex file structures in my journey through web technologies. At some point I would like to create some educational images and videos relating to programing and web-development that I think would have been helpful to me along the way.

My dream last night was about a useful and creative project — one that I might yet do — and one that is of note because of how different it is from the WP development. I dreamt of taking one of the many high-resolution photos that I have, printing it out divided onto smaller pieces of paper to be glued onto a large canvas. The paper was glossy and already printed on magazine paper, creating an interesting jumble of indecipherable faded text mixed with a beautiful Grand Canyon scene.

In my dream the canvas result was quite exciting. This pic (below) is my quick photoshopped version, but in the dream, the surface was more overlapping and choppy, with a shiny veneer, and pages oriented in all different directions: 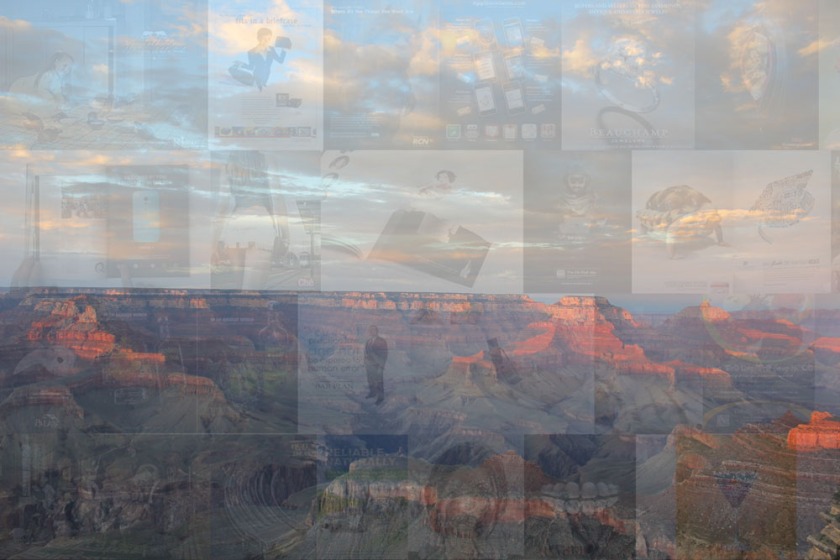 Just imagine a place far, far away (…and yet very close), a series of “rooms”  where people can talk.  They can make up names for themselves, share information on how do things, laugh and bicker.  They can even be anonymous. 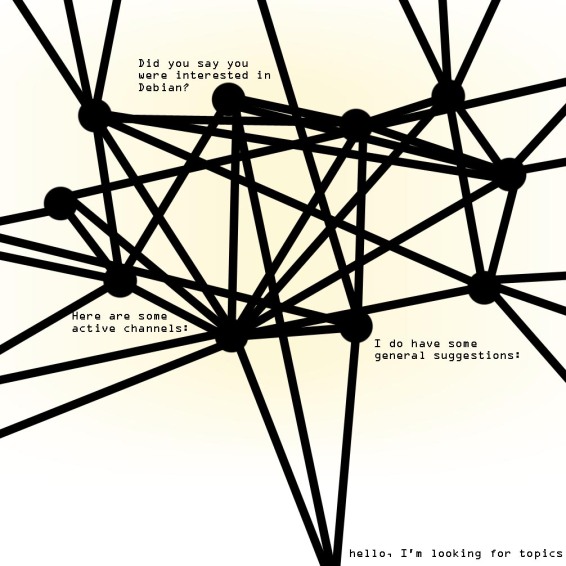 How did I hear of IRC?

“Did you hear that on IRC?” I would hear from programmer friends exchanging verbal jabs, at which point they would shake their heads apologetically.  From tone of voice only, I understood that IRC was something embarrassing to mention out loud.  Only later, having forgotten about IRC, and become an active member of a local makerspace where the first meetings I attended ended with “…let’s make our own IRC channel,” followed by a chorus of “Yeah!”, did I understand that there could be something good, delightful even, about these three letters.

Why would someone want to use it?

IRC chatrooms are often useful for people who are branching out, trying a new program, learning something new. They want to share stories, find out what other people know, get some help.  On the other hand, IRC is also for people who have been working on a collaborative project for some time and care about its future. They might want to provide help and spread the word. Note that during the early to mid 2000’s IRC channels were invaded by rude teenagers and trolls who “made it suck” for everyone else.  Nowadays, topical enthusiast seem to run the show, and rude people seem to have migrated to more mainstream forums (along with most other people).

How did I first use IRC?

I came across an IRC channel as a shortcut embedded in a website.  Eventually I needed help with a project from my makerspace community, so I navigated to the webpage and followed some prompts asking me for a user name.  Then I hit “enter”. A window with scrolling blocky letters gave me pause.  I waited and read, seeing:

Then I figured out where to type messages.  I think I said “hello” or some such nicety and someone responded, which led to conversation.  It was a good experience. After that I occasionally used this website-embedded IRC for specific problems, but noticed that some users remained online at all times.  How and why did they do this, I wondered?

Later, as I found myself focusing on various programming and design skills, I craved the instantaneous presence and feedback of others. Sometimes I went to forums and asked questions, but this way there was a time delay. Eventually I made it a goal to contribute to an open source project.  Then I began to understand why some people enter certain IRC channels and stay put.  I went to a weekend workshop on contributing to open source projects and almost the first thing the presenters told me to do was set up an IRC client. An IRC client is like a browser, but instead of using a browser to find websites, one uses a client to connect to a series of “channels” (chat rooms) .  With a client I could quickly connect to a multitude of channels and stay as long as my computer was on (and connected to the internet). What other platforms like Gchat and Facebook offer through chatting in personal networks, IRC offers topically.  For someone like myself, who is interested in working on certain projects and is excited to talk with people about these specific interests, a “place” to instantaneously communicate, has become ideal. Now, when I am excited about a topic on an IRC channel, only to find that it is abandoned, I am sad.  More than ever, I want to talk about my projects and hear about other’s projects through that blocky, and ever available list of names.

Setting up IRC on Mac:

The first time I set up IRC on my Mac, I used a Firefox add-on called Chatzilla.  I flailed around trying to fill in numerous fields in their auto set-up form, only to realize that all I needed was the host (like chat.freenode.org or irc.debian.org) and the name of the chat room (usually looks like #davismakerspace or #debian).  Later I used Colliloquy.  They are similar. Some channels are secure and require passwords and additional info, but this will be self evident.

Setting up IRC on Linux:

On Linux I’m going the way of the terminal, in part because of my interest in using more opensource technology and in part because of my desire to learn the basics of the command line.  To download the client Irssi, I typed the typical install command “sudo apt-get install irssi”, launched the program, and then typed “/connect chat.freenode.org” (for example) to connect to a host, and then typed “/join #name_of_channel”

Also, here is an amusing description of IRC in the show ‘Numbers’:

On Friday September 7th 2012 watch “I Want You To Bite Me,” a curated screening at Oddball Films in San Francisco. For more information, go to: http://oddballfilms.blogspot.com/2012/08/i-want-you-to-bite-me-fri-sept-7-8pm.html#more.

This is an evening that examines and celebrates those glorious shape-shifting bloodsuckers, Vampires; both the lore and the fearful psychological fascination. This screening lays the groundwork for the evolving sci-fi version of the beings that later showed themselves in True Blood, Shadowrun (the RPG) and God Save the Queen, a novel by Kate Locke. Enjoy this glimpse into the past that started it all!

For a tour of mad science through film, come to Oddball Films on Fri. June 1st – 8PM. The program is packed with excerpts of films about time-travel, hideous experiments, and ultimately, the fine line between intelligence and folly in the lab.  For more information and a list of the films to be screened, go to: http://oddballfilms.blogspot.com/2012/05/blind-reason-night-of-mad-and-bad.html

Dreams about programming and web development

Trip to the Honey Moon

Past and Future Conditions, The Exhibit

Creativity That Passes The Inspection